As the gamefi craze swept across the world, global gamefi projects began to proliferate, and the considerable revenue of the top gamefi attracted more and more gold guilds, global players, and capital institutions to join, and everyone became unknowingly. It is a member of the gamefi era, but in the early stage, the entertainment and interactivity of a single gamefi is very weak, including the head gamefi is also urgently looking for the possibility of continuous breakthrough. With the entry of GIIIO, it became a key fuse for detonating the metaverse era.

It is reported that the first GameFi in the GiiiO ecosystem, Star explore, will be launched soon. Its birth presents us with a new possibility. Compared with the traditional game industry, the complete upstream and downstream industries, from capital to events, from games Portal to hard setting. The gamefi industry in its nascent stage appears to be thin. More and more gamefi practitioners and players are entering the game, and Star explore has become the key to the sustainable development of gamefis GIIO is a metaverse world developed by a group of engineers based on human's imagination of the universe, desire for resources and power. Its 1.0 ecology is a 3D interstellar theme game "GIIO Interstellar Explorer". The plan is to allow a large number of players Understand and become an explorer of Planet GIIIO; GIIIO Ecology 2.0 will open the editing mode, players can participate in the construction of the interstellar civilization metaverse, allowing more players to achieve X To Earn. 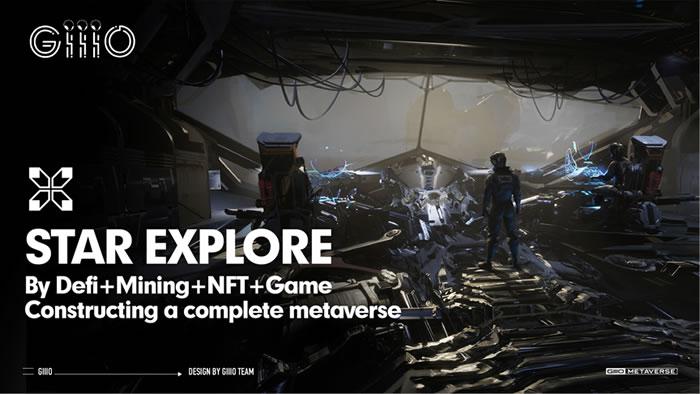 Star Explorer is a blockgamefiFi+NFT game based on the BSC public chain. It has two major characteristics, one is that the in-game tokens have a super deflationary mechanism design, and the other is that GIIIO has introduced Defi empowerment to provide players with more long-term and stable income capture opportunities. Through Defi + mining + NFT + games, construct a A complete metaverse. In the game, players can obtain land NFT through auction, or directly buy blind boxes for trading, mining and other activities. The combination of various scenes in the whole game builds a complete ecological universe. GIIIO builds a world for players to perform various actions and creations independently. In addition, GIIIO will enrich more interesting StarCraft scenes, and will gradually add elements such as "battleships" and "competition", so that players can truly enjoy themselves. Immersive experience to enhance the gaming experience. In addition, Star Explorers will allow each player to experience the game immersive and even build it by forming a DAO, including economic revisions, feature releases, asset release schedules, and the option to incorporate player-created content, making any Brain holes can be attached to the main body of this game. In the long run, DAO managers will eventually be able to drive the direction of Star Explorer. In other words, this is a new type of gamefi with self-evolution capabilities. At present, Interstellar Explorer is about to go online, and the market is booming. With the rapid increase in the number of players and the popularity of the game, Interstellar Explorer may be expected to become the first phenomenal gamefi in 2022, opening up the era of gamefis 2.0!

LV Plus is about to launch, opening a new era of the Metaverse

The world's first pan-entertainment social metaverse platform, ARES is about to shine

REVA, A Start-Up Company Locked by Wall Street Capital, Has Become a New Star in The NFT Industry

bitcoin token has made great achievements: it was listed on FEIXIAOHAO and has become a new lead in the DeFi3.0 field